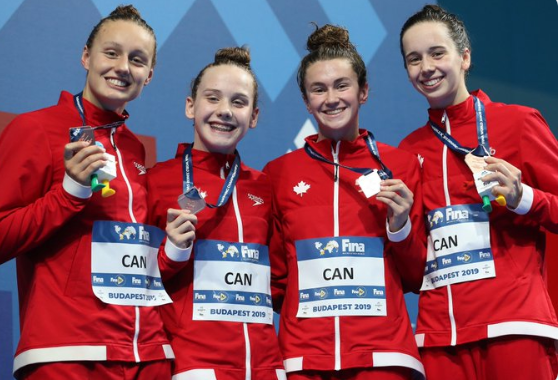 Their poise led them to a bronze-medal performance during the opening day of action at the FINA World Junior Swimming Championships in Budapest, the capital city of Hungary.

“It was a good time (8:01.14) and I am really happy with the result,” said O’Croinin, who competes out of the Edmonton Keyano Swim Club. Her anchor leg of 1:57.95 was a lifetime best relay split. The only swimmer to break 1:58 in the event, O’Croinin brought Canada into third place from more than a second behind Germany.

“Everyone put in a real good time so we had a lot of fun together,” said O’Croinin, who already has a senior FINA World Championships bronze to her credit for her heat swim in the same event in Gwangju, South Korea, last month.

National Development Coach Ken McKinnon, the team leader at these championships, was impressed with the efforts of his swimmers, who arrived in Hungary last week.

“Our swimmers did a very good job and I was most impressed with the way they were calm and collected against difficult competition,” McKinnon said.

Meanwhile, Halifax native Jade Hannah won her 100-metre backstroke semifinal in a time of 59.97 seconds to advance to Wednesday’s final as the No. 1 seed.

The returning bronze medallist trains out of the Swimming Canada High Performance Centre – Victoria. She said she’s battled through some inconsistent swimming recently, but has “worked super hard” to keep improving.

“It was a lot of fun, especially getting the time down to 59 and I’ll be working even harder to get a little more off that time when I get to the final,” said Hannah, whose personal best of 59.62 came at the 2017 event in Indianapolis.

“It was all right,” Mastromatteo said, “It was a decent time for the effort I put in. I am looking forward to the final (on Wednesday) to see how well I can do in that race.”

The men’s 4×100-m freestyle relay team of Josh Liendo, James Lebuke, Finlay Knox and Cole Pratt missed the podium by just over a second, finishing fourth in their final at 3:20.17.

Liendo, a Markham native who was celebrating his 17th birthday, said the team was pleased with its effort and performance and now their focus will turn to individual events for the rest of the week.

Cole Pratt picked up a seventh-place showing in the men’s 100m back semifinal and Tyler Wall was eighth.

Wall called the race “a good one, but the first 50 (metres) or so were pretty slow,” said the Penticton, B.C. native .

“Overall, I am happy to get in the final and I will be looking to get another good time.”