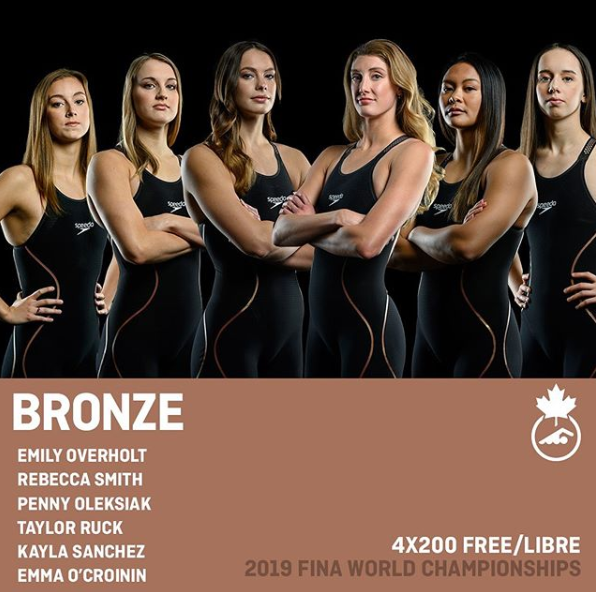 Australia won an epic battle with the Americans for gold, clocking a world record seven minutes and 41.50 seconds. The U.S. was close behind at 7:41.87 while Canada’s Kayla Sanchez, Taylor Ruck, Emily Overholt and Oleksiak finished in a Canadian record 7:44.35.

‘’Our strategy was honestly just have fun, go in and see what we could do,’’ said Oleksiak, who trains at Swimming Canada’s High Performance Centre – Ontario. ‘’We really didn’t have any expectations. We weren’t expecting to come first, we weren’t expecting to come last, we were just all having a fun time in the (preparation area), dancing, getting ready and being happy, and I guess that worked out for us.’’

Oleksiak’s split of 1:54.36 was her best ever to move Canada ahead of China and earn her fourth career medal at worlds, the most ever by a Canadian female swimmer.

‘’It was really exciting but I honestly wouldn’t be able to do it without these girls,’’ she said. ‘’I get to train with them day in, day out, so getting to have that push every day is a good thing.’’

The medal is Canada’s fifth in the pool at these championships, the country’s most since hosting in Montreal in 2005.

Oleksiak’s HPC-Ontario teammate Rebecca Smith will also receive a medal – the third of her career – for helping the team advance through the morning heats, as will 16-year-old national team rookie Emma O’Croinin of Edmonton. It’s the second career medal for Overholt (HPC-Vancouver), Sanchez and Ruck (HPC-Ontario).

‘’Swimming at the world championships and Olympic Games is about making the most of opportunities and the Swimming Canada team certainly did that tonight,’’ said High Performance Director and National Coach John Atkinson. ‘’It took six swimmers to earn the medal and an incredible final split from Penny Oleksiak, 1:54.36, faster than the time she anchored Canada to bronze with at the Rio 2016 Olympic Games. She brought Canada through into the bronze medal position, but all six women deserve massive credit for another opportunity taken.’’

Speaking of opportunities taken, Overholt’s HPC-Vancouver teammate Markus Thormeyer made the most of his second chance in the men’s 200-m backstroke.

In the morning prelims, Thormeyer ranked 17th and would have missed the semis but was added to the semifinal when one of the other entries pulled out. He received a text about 90 minutes before the evening session started telling him he was in.

‘’I wasn’t even thinking about the record,’’ said Thormeyer. ‘’I wasn’t even supposed to be here so I just had nothing to lose and went for it. Going a best time by half a second feels great.’’

‘’Didn’t he just make a statement of intent with the way that he swam that race,’’ said Atkinson. ‘’To finish second in his semifinal and make the world championships final in fifth position is great.’’

Women’s 200-m individual medley bronze medallist Sydney Pickrem will go for a second medal after ranking third in the women’s 200-m breaststroke semis in 2:23.11. Kelsey Wog of Winnipeg also made the cut at seventh in 2:24.17.

‘’I had never swam this event at a worlds before,’’ said Pickrem. ‘’But I definitely set a goal for myself to reach the finals in all of my events and it’s exciting to see both Kelsey and I in the final.’’

‘’Sydney and Kelsey took their opportunities and now they’re in the world championships final,’’ Atkinson added.

Prior to her medal performance in the relay, Ruck qualified fourth in the 100 freestyle semi in 53.04.

The eight-day meet continues through Sunday at the Nambu University Municipal Aquatics Center.