January 21st, 2019, EDMONTON- Swimming Canada has announced a list of 12 female coaches from across the country to participate in their first-ever female coaching leadership workshop, “Taking the Stage” in Ottawa, Ont. February 8-9.

Of the 12 coaches named to a pristine list of names, Alberta’s own Wendy Johnson, of Cascade Swim Club in Calgary, will join counterparts from six provinces to participate in the two-day seminar.

Johnson, a former world record holder and two-time Olympian, has been a coach with the Cascade Swim Club since 2004. She has been an influencer of positive swimming and performance, attending multiple camps for athletes at many levels over her 20 plus years of coaching.  She has been the personal coach of many provincial and national records set by Cascade swimmers, including over 40 provincial and two national age group records set by Cole Pratt in 2017-2018. 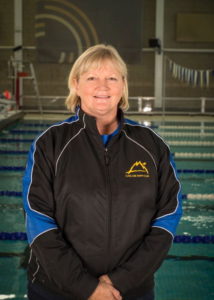 Taking the Stage, in partnership with Own the Podium and the Humphrey Group, is designed to specifically help female coaches by supporting them to develop the skills needed to become strong, confident leaders.

While Johnson will participate in Taking the Stage with Swimming Canada, other female coaches in Alberta will also have the opportunity to have a women in sport focus through the Swim Alberta Discover Camp on April 7th.

The spring Discover Camp series will be led by females coaches an serves as  great networking opportunity. Alberta coaches will be able to listen and talk about the professional angle of the gap between female vs male head coaches, as well as the even fewer female coaches found in leadership situations in camps, tours and other higher performing opportunities.

-With Files from Swimming Canada

For information related to Swim Alberta: