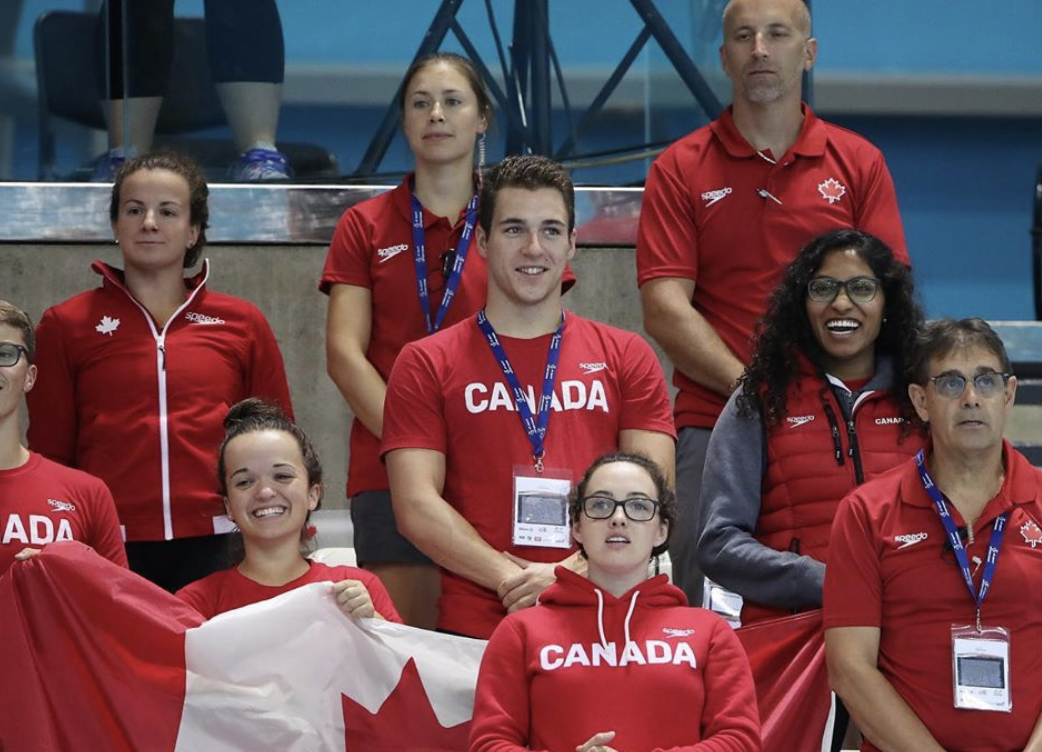 LONDON – Almost a decade removed from her maiden world championship appearance, Aurélie Rivard added one more milestone to her remarkable resume on Monday, thanks to a gold-medal performance in the 50-m freestyle S10 on the first night of the 2019 World Para Swimming Championships at the London Aquatics Centre.

The competition, which also serves as the first qualifying opportunity for Tokyo 2020, runs until Sunday at the iconic venue which hosted Olympic and Paralympic swimming back in 2012. Webcast is available on the Canadian Paralympic Committee and Swimming Canada Facebook Live platforms, with finals streamed on CBC Sports.

Rivard’s triumph on opening day marked her 10th podium finish in her fourth career appearance at the event, dating back to her debut at age 14 in 2010. She now has three world titles to her name, after being crowned in the 50 and 400-m free in 2015.

“I feel old. I’m treated like a senior citizen on this team,” joked the 23-year-old from St-Jean-sur-Richelieu, Que., who trains at Montreal’s High Performance Centre – Quebec with coach Mike Thompson. “It’s amazing to think it’s been almost 10 years since my first world championships.”

After flirting with the world record she set at Rio 2016 in the morning preliminaries, coming within 13 hundredths of a second in 27.50, the two-time Olympian won gold in the evening with a time of 27.86.

“It’s a good start on the medal front. It was a much tighter race than I had anticipated, but I’m obviously very happy I won,” said Rivard, who led the final from start to finish but was challenged by crowd favourite Zara Mullooly of Great Britain, who took silver in 28.22. “I look forward to watching the race again and talk with my coaches to see what happened compared to this morning. I think this morning, I was more relaxed, less tense. I didn’t necessarily expect to swim so fast this morning, while tonight my expectations were obviously much higher.

“All in all I’m very pleased. It was an emotional night for me, swimming in the pool where I had my big breakthrough at the 2012 Games. It brought back good memories.”

In claiming gold, Rivard earned herself a nomination to the Canadian Paralympic Committee to represent Canada in Tokyo next summer.

“Congratulations to Aurélie, coach Thompson and their team of experts at CHP-Quebec. Aurélie is a champion swimmer who tonight showed great composure and a fighting spirit to get to the wall first and claim her reward for hard work and dedication. She was able to perform when it mattered, proving again that she is a great champion,” said Wayne Lomas, Swimming Canada’s Associate Director of High Performance and Para Swimming National Coach. “Aurélie’s gold medal tonight is a reward for her talent and partnership with Mike, as well as their application and commitment to excellence.”

Tess Routliffe of Caledon, Ont., and Alec Elliot of Kitchener, Ont., also reached the finals on day one.

After setting a personal best of 36.48 in the morning, good for fourth place heading into the title race, Routliffe held her position and finished fourth in the women’s 50-m butterfly S7 thanks to a time of 36.70.

“I’m really happy about this morning’s race. A personal best in my first race at worlds, I can’t really ask for anything more,” said the 2016 Paralympian, who also trains at CHP-Quebec in Montreal and whose previous PB in the event was 36.80, set at the 2018 Pan Pacific Para Swimming Championships in Australia. “Tonight, I wish I had gone a little faster, but it happens. I gave it all I had. I was really nervous to race today but the first day always helps to get the jitters out, so I’m really looking forward to more great racing this week.”

Elliot also held on to his position from the morning in the men’s 50-m freestyle S10 final, placing eighth from Lane 8 in 25.08. The 2016 Paralympian, who trains at Club Rouge et Or in Quebec City, had clocked 25.41 in the prelims.

“It was super exciting to make the final on day one. It was exactly what I was hoping for, to come in and make the final. It’s my third best time ever, after the two I posted in Rio, which were just slightly faster. So it was an incredible time for me.”

Lomas was pleased to see Elliot and Routliffe join Rivard in the finals on opening night.

“It was great to see Alex and Tess swim in finals. Alex’s swim this morning was his fastest since Rio, and to improve on that again tonight by a third of second was a reward for his talent and commitment.

“Tess swam a lifetime best this morning to move through to the finals and her swim this evening was also very good. Tess enjoyed a very good preparation camp in Vichy and here in London, and is in great form as we head further into the week.

Seven other Canadians were also in action on Monday but none of them were able to advance past the preliminaries.

The first Canuck to jump in the pool, 2016 Olympian Abi Tripp of Kingston, Ont., missed the women’s 100-m freestyle S8 final by a single spot and 38 hundredths of a second, taking ninth place overall in 1:11.09.

Camille Bérubé of Gatineau, Que., a veteran of two Paralympic Games including London 2012, met a similar fate in the women’s 50-m butterfly S7, missing the evening session by only 15 hundredths with a time of 39.48.